My Jeep is a 1986 CJ7.  It originally had a AMC 258 6-Cyl with a T4 transmission and I  installed a rebuilt 1973 AMC 304 V8 into it.   The swap is pretty easy and did not require any special fabricated parts or expensive adapters.  The AMC V8’s are all the same external size and bolt pattern so this install applies to the common AMC 360 as well.   I’ll list all the “issues” I ran into and explain how I got around them.
I rebuilt the 304 myself and I will not go into much detail on the rebuild itself.  I’ll show some pictures of the engine but the rebuild is for another write up some day.
My old engine was the common 258 6-Cyl shown below: 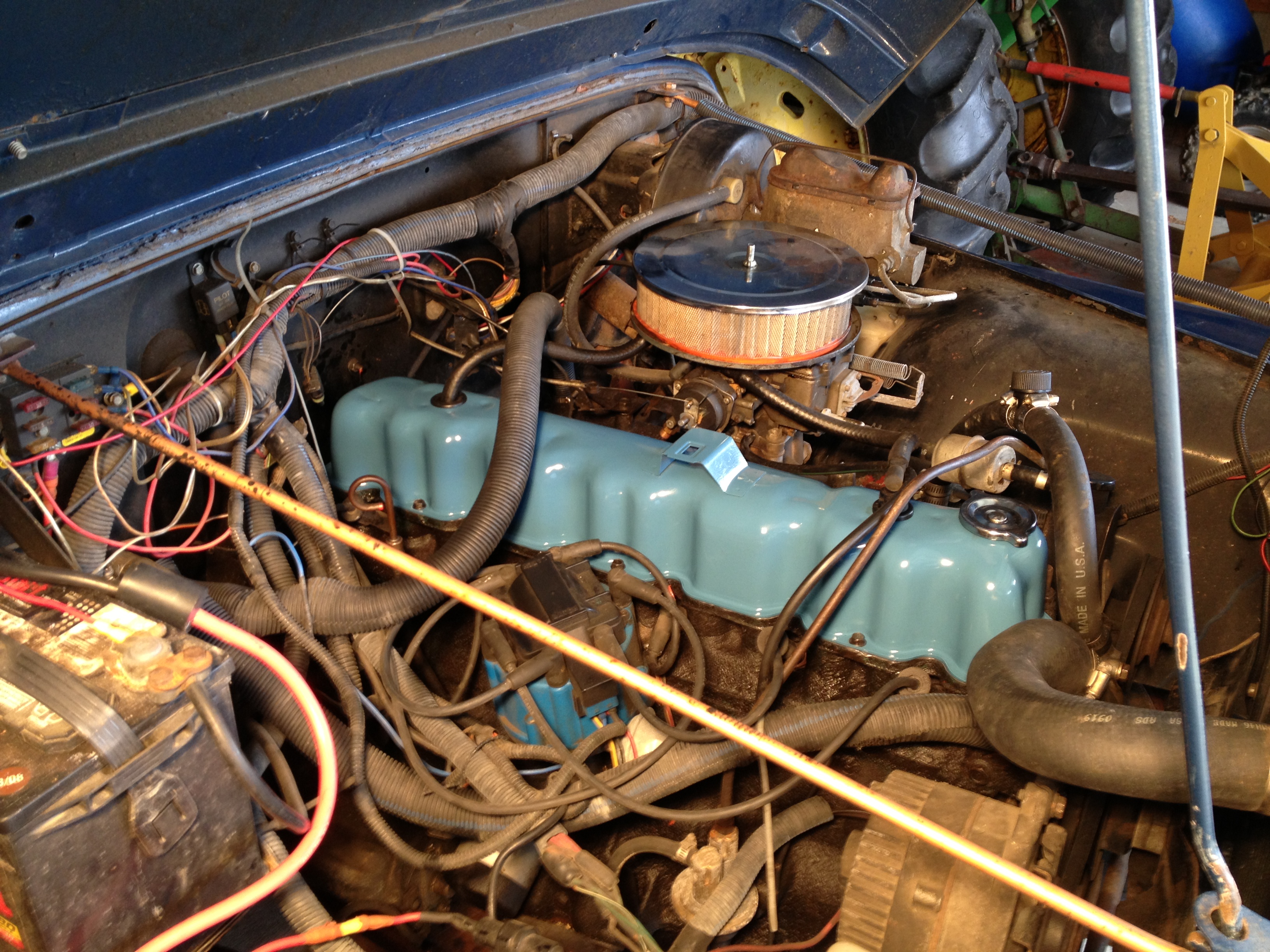 The 258 engine ran well and did not smoke.  HP was pretty bad and I had trouble accelerating up steep hills with the crappy 2.73 axle ratio.  I often had to down shift and had the gas pedal to the floor.    It was probably time for a rebuild or new engine.
I searched Craigslist and found a running AMC 304 for $200.   I took the guys word for it and bought it since I was going to strip it down anyways.  It ended up being a good block and I did not have to spend any serious money for new heads or anything like that.   This is very important:  Make sure to buy a COMPLETE engine with the alternator and power steering brackets.  Also get the V8 motor mounts.   If you don’t, you will be searching junk yards to find all this stuff which is a pain and cost money.  I picked a nice torque cam (Comp CAM XE256H) and bought the matching spring and lifter kit.   I did the usual rebuild with new oil pump parts, new rings, bearings, bored cylinders, AMC Performer 4 barrel intake with Holley 600CFM carb.   I also upgraded the ignition to modern GM style HEI.   This is a “must” have for sure.  It greatly simplifies the Jeep wiring and provides much better spark to the cylinders.  This was the best single upgrade I did to the engine in my opinion.   Lots of guys install the AMC 360 and that’s fine.  I personally like the 304 and did not want to upgrade the drive train to handle the HP that the 360 has.   I was looking for a little more power and the classic V8 sound.  The 304 delivered both for me.

Rebuilt 304 V8 shown below:  (don’t use the 4 blade fan it sucks bad).  I swapped it for a 7 blade with clutch later on.  I used real AMC blue paint which is Seymore EN-66 Hi-Tech engine metallic.  It looks great and is sold on Amazon for about $11 a can. 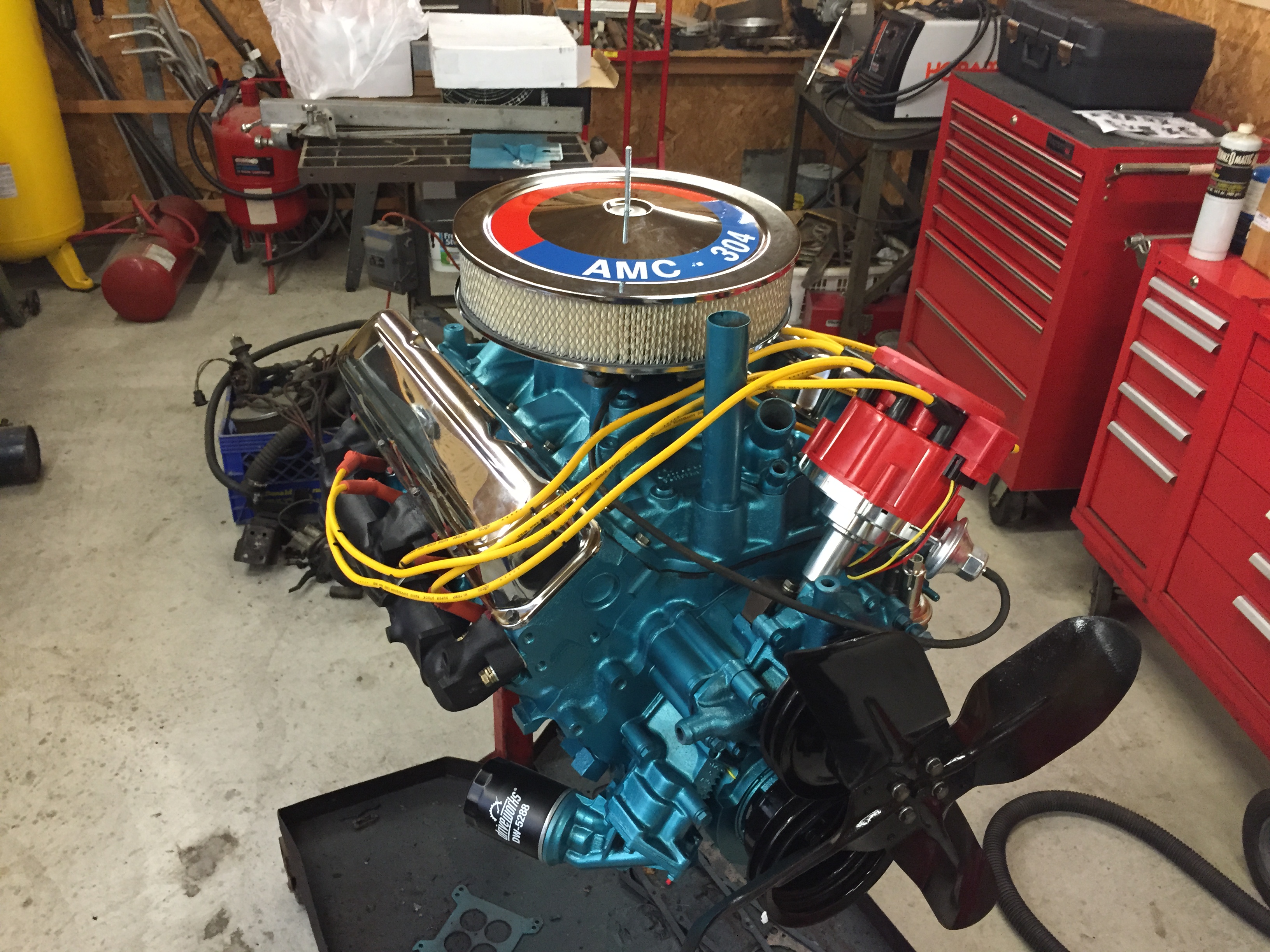 The first step is to remove the old 258 6-Cyl.   I used a 2 Ton engine lift which made easy work of it.   I unbolted the engine from the T4 transmission and left the T4 in the Jeep.  I did unbolt the drive shafts and slid the transmission back away from the engine about 6 inches.   Disconnect all the wires & hoses.  I labeled all wires with masking tape ( tachometer, 12v, thermostat,  oil pressure, etc)  this made it easier for the install later.    Unbolt the exhaust pipe and completely remove the exhaust system from the jeep.  This will not be used again.    I removed the power steering pump and just moved it aside.  This will be reused later. I left the alternator on the engine and just unplugged it.  Unbolt fuel lines and anything else connected to the engine. 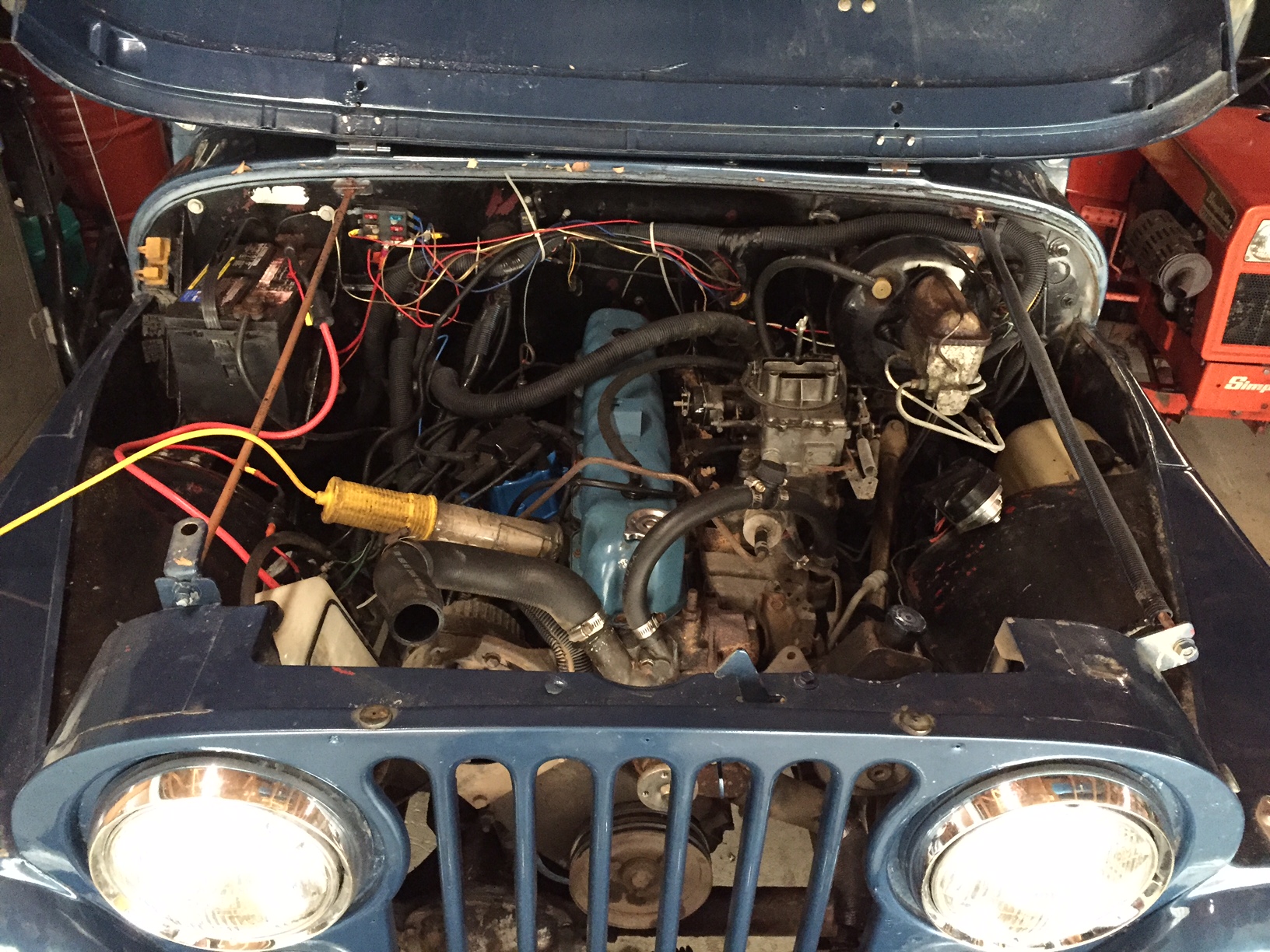 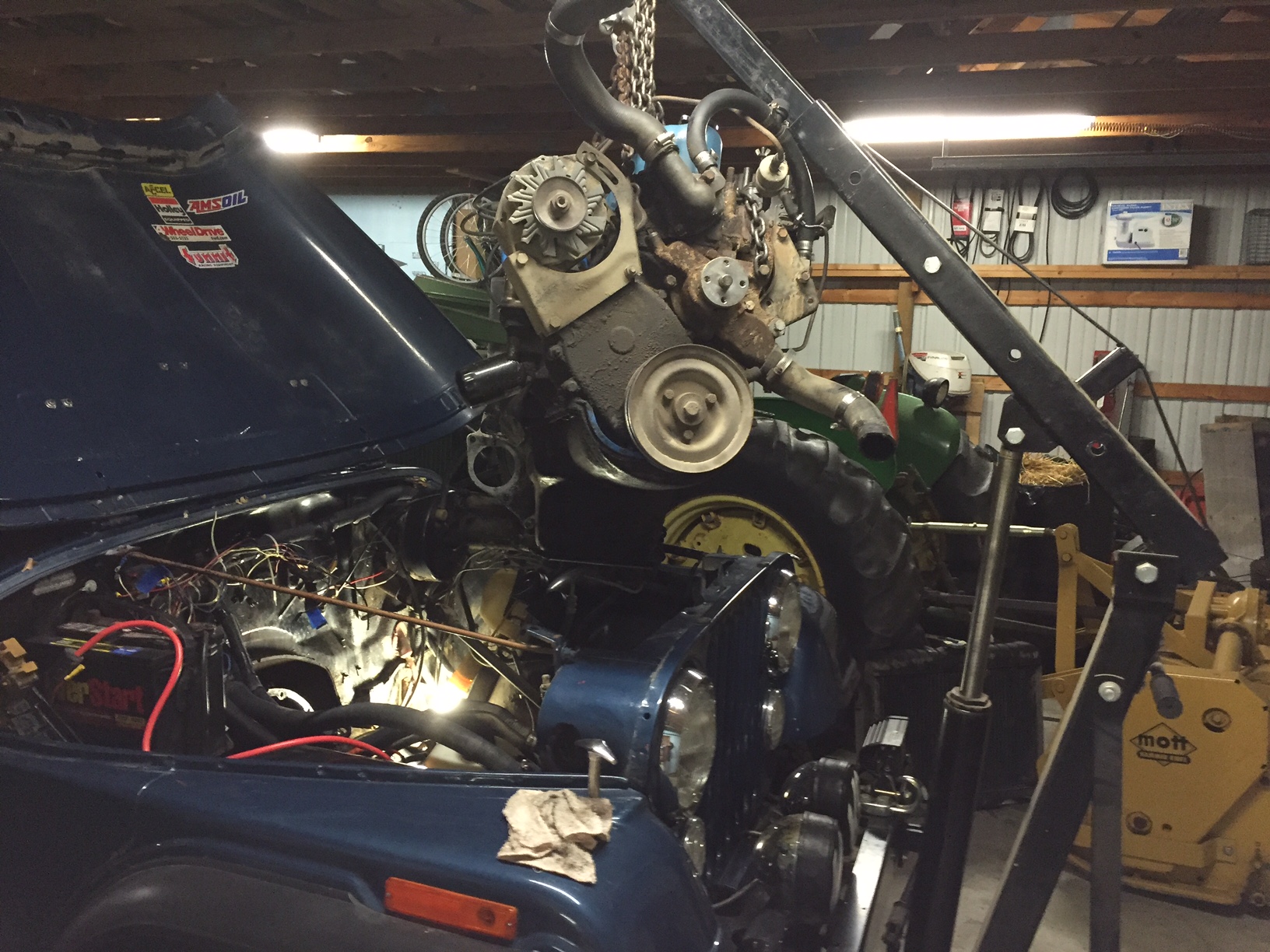 Unbolt engine from frame and transmission and pull out with hoist. 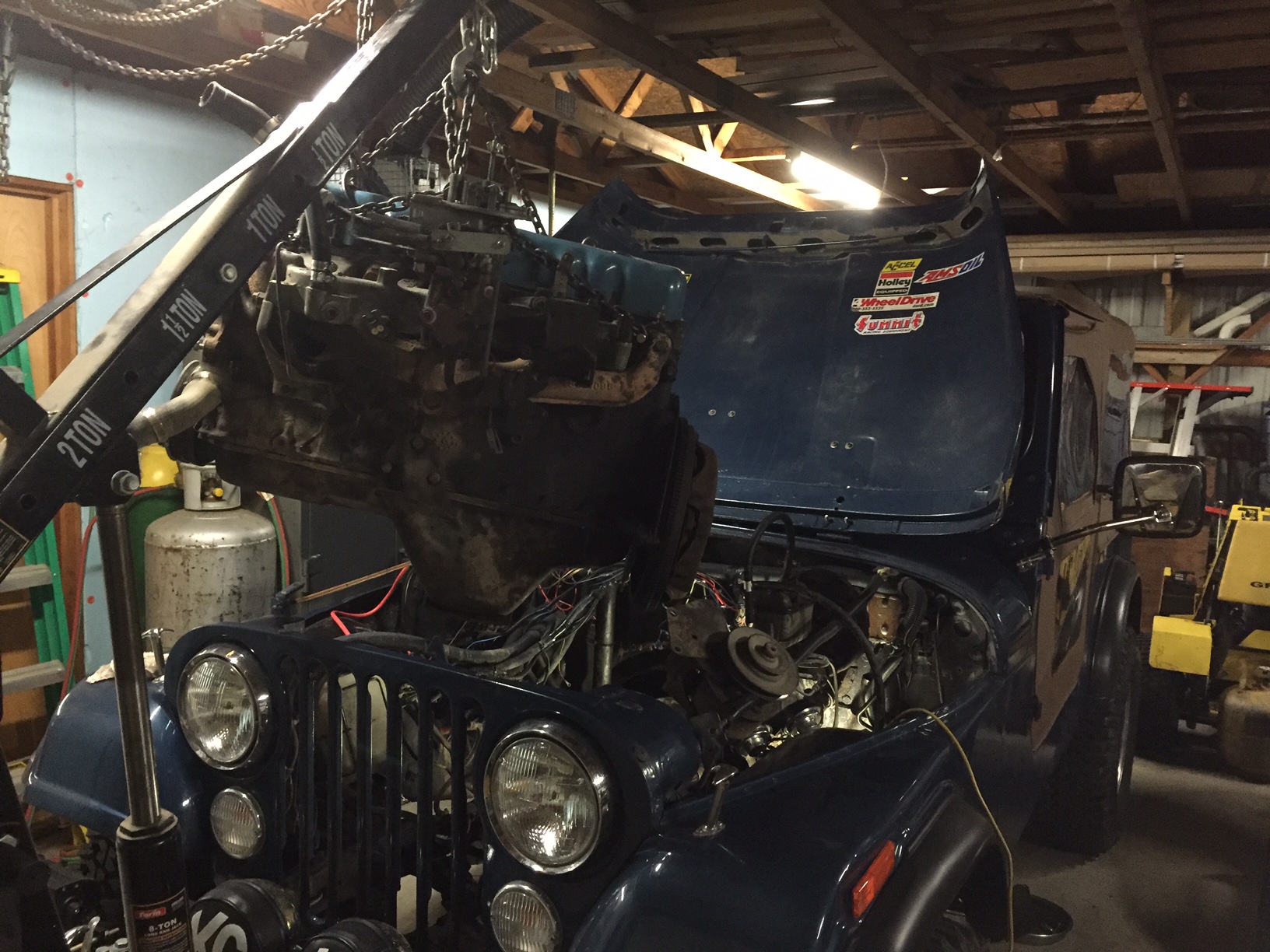 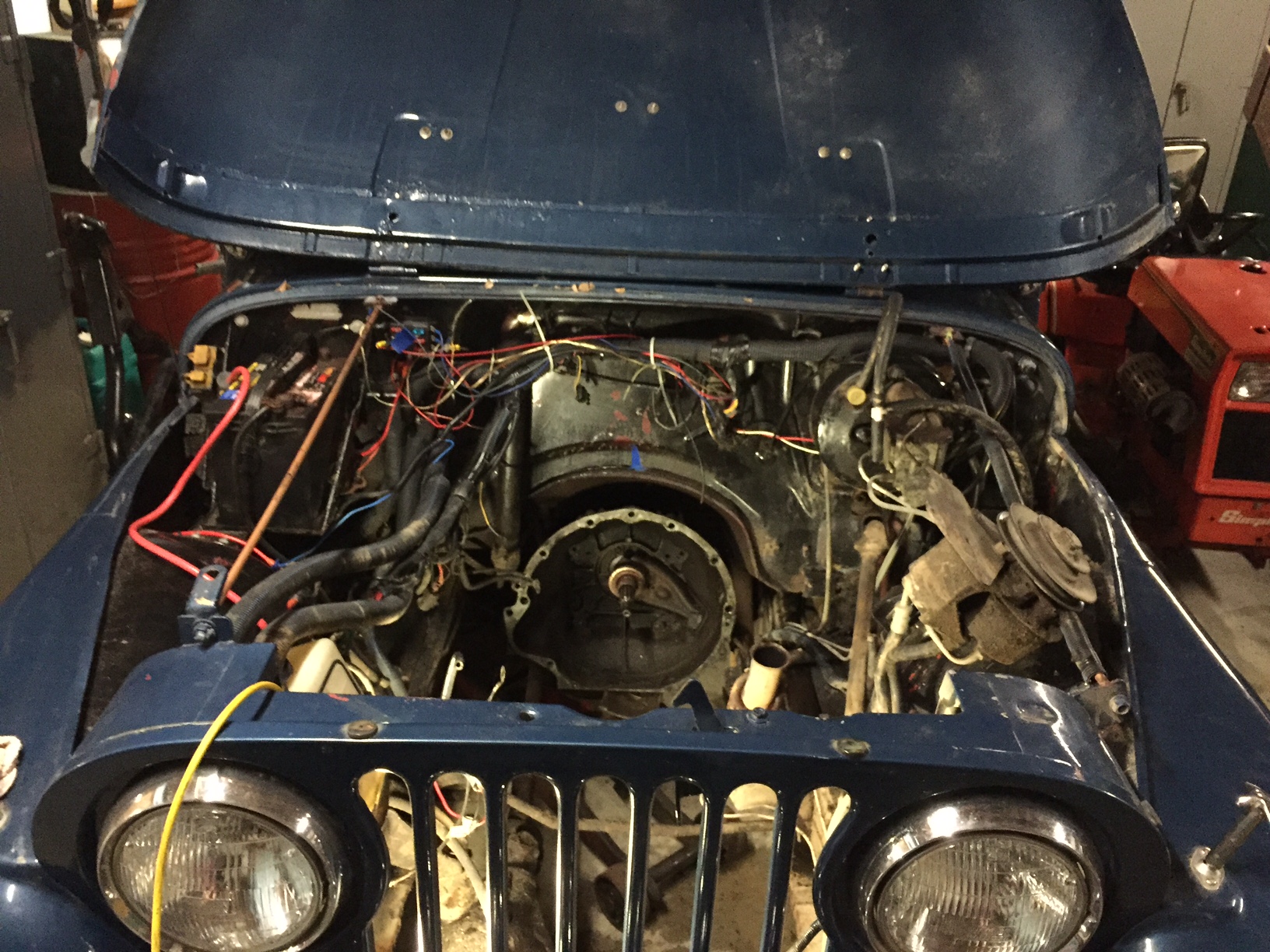 Below is the removed 258.  Its sitting on some blocks of with with wheels so I can move it around.  I sold it on Craigslist for $350 to recoup some $$$ from the swap. 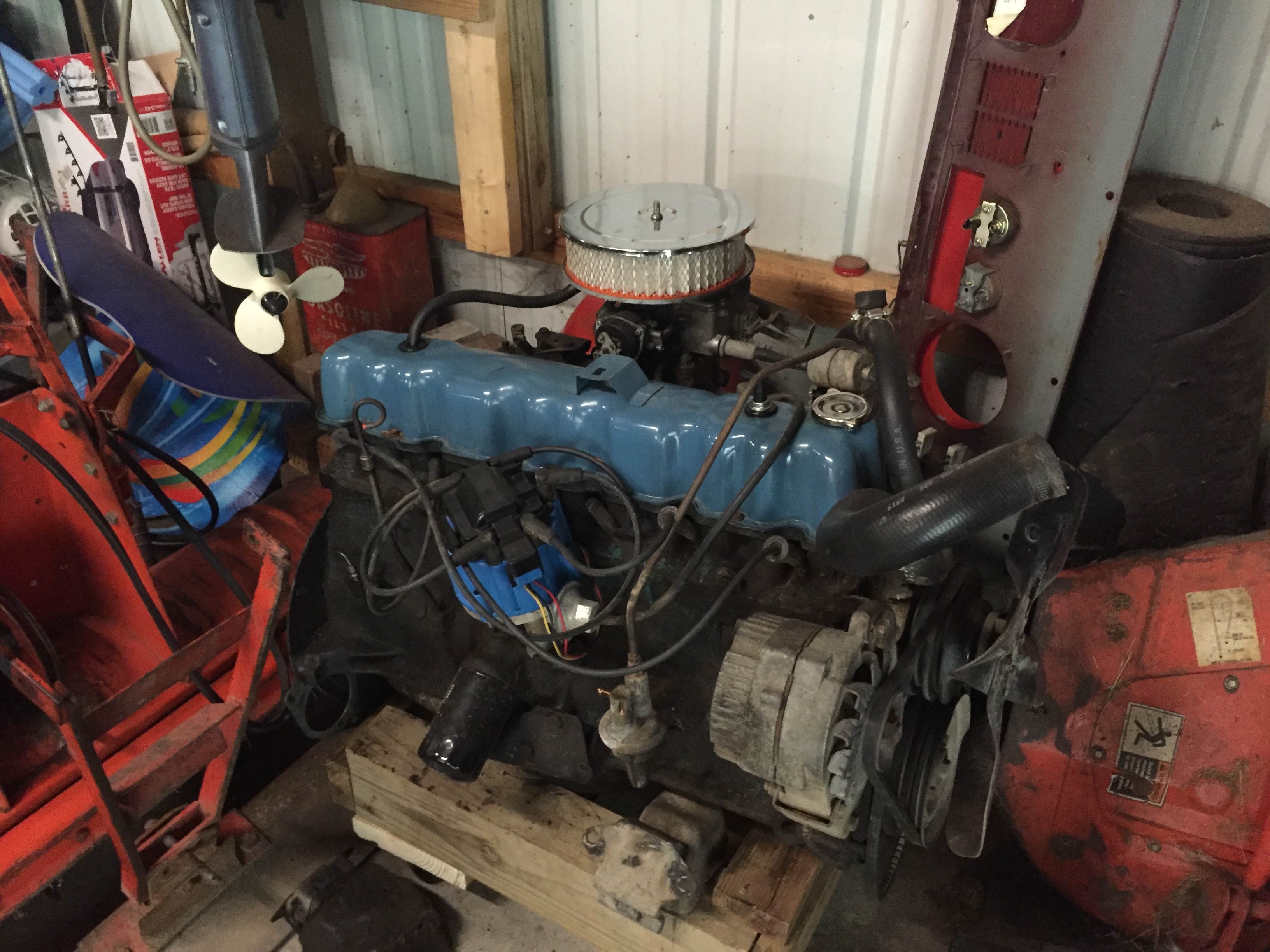 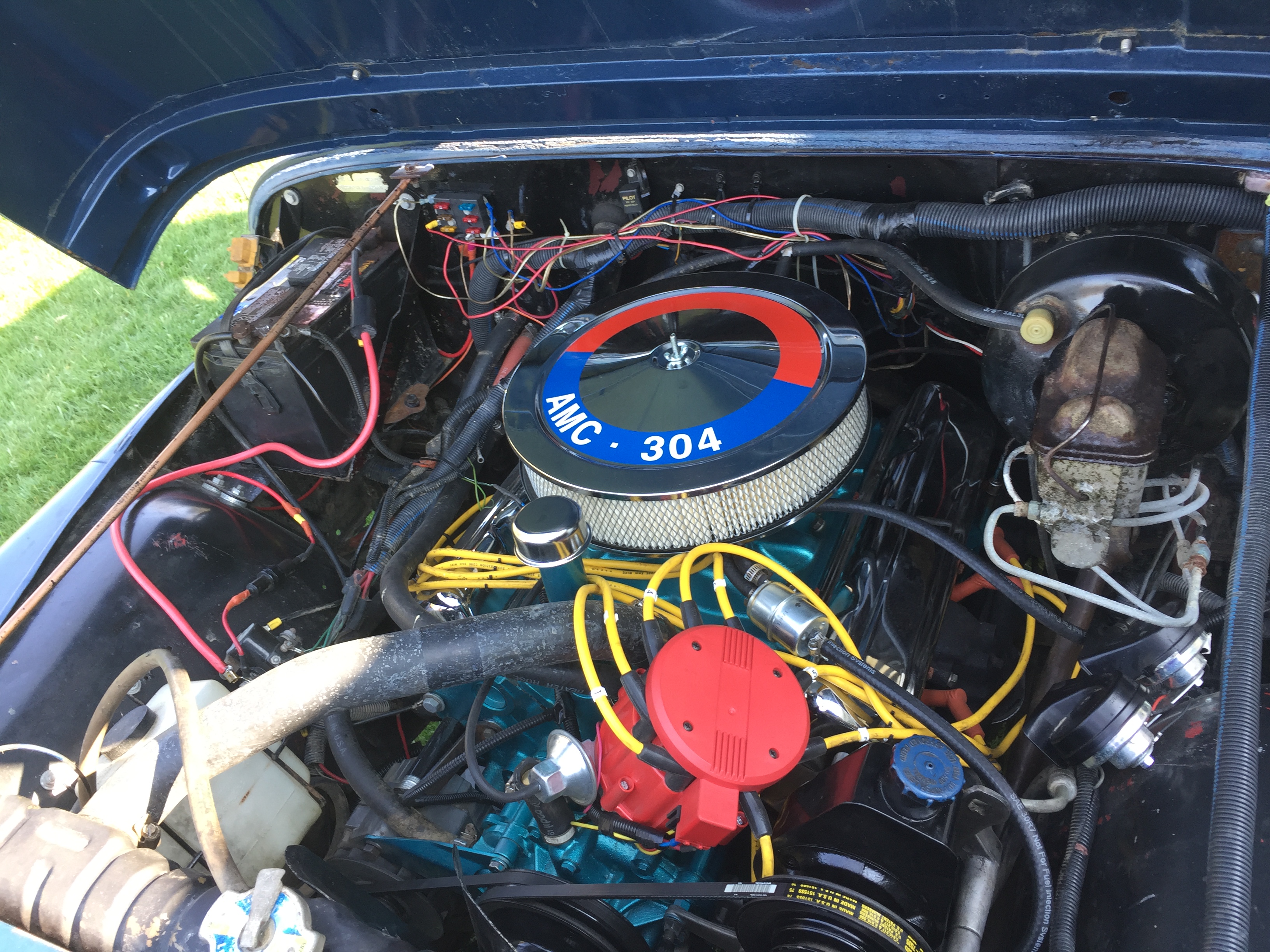 Issues I had to deal with:

Below shows the clutch fan clearance from the radiator.  Its about 1.5″ which is about right.  I used the upgraded 7 blade fan and the stock 3 core radiator for  V8 cooling.  The stupid 4 blade fan just does not cut it.  The stock radiator is fine however so there is no need to buy a new one. 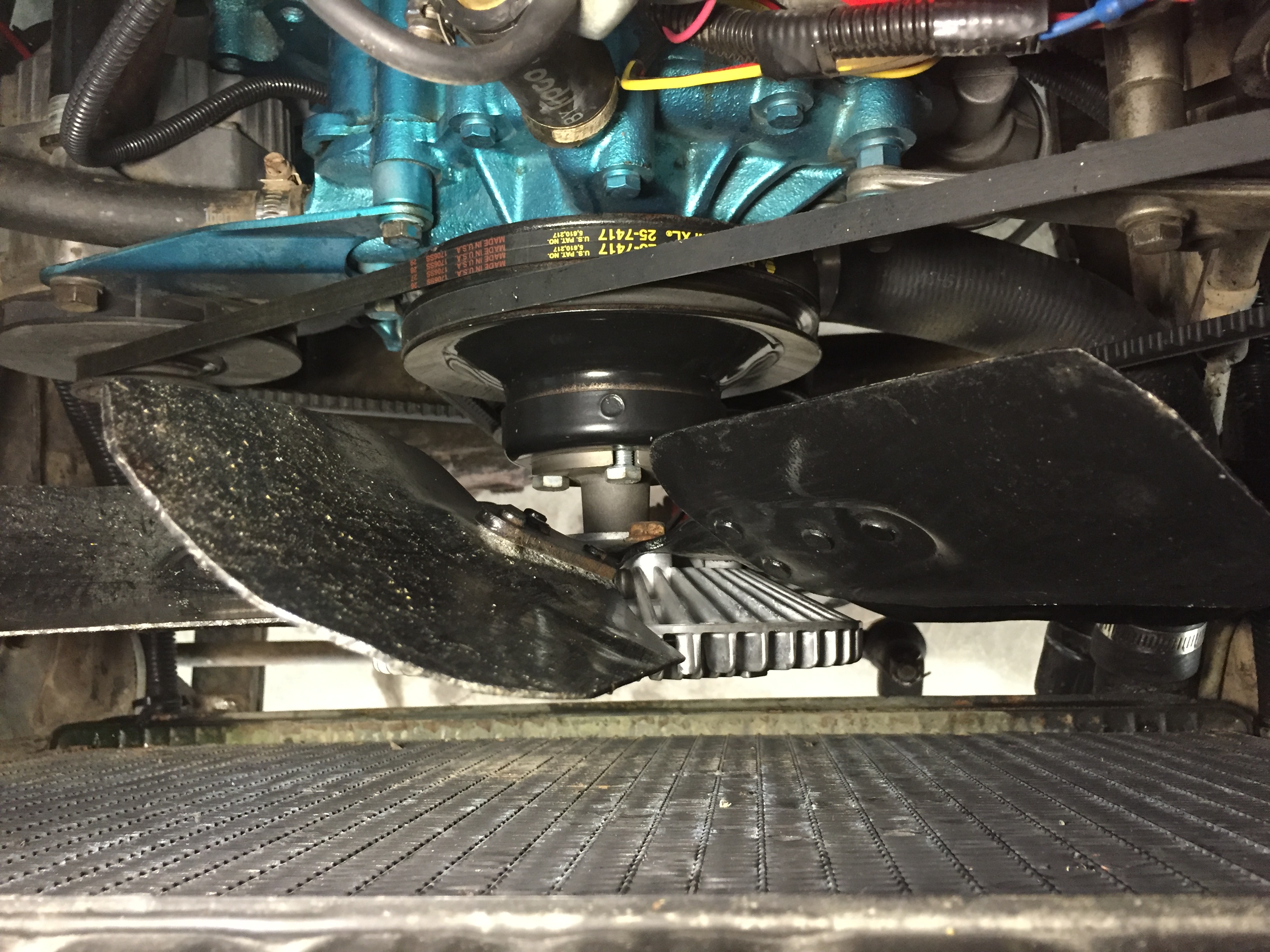 The GM style  HEI distributor is huge compared the the old one.  This is not required but was an upgrade I wanted to do.  You can use the old motorcraft distributor and module if you want but it is really old technology and has its share of issues.  I personally don’t like the old motorcraft setup.  The modules burn out all the time and the spark is just not that great.  The HEI setup with vacuum advance is fool proof and is plug and play for the most part.  Only 3 wires needed, (12v, ground, tachometer).   I had to position it like this to miss the fan belts. (shown below).   I also plugged the small coolant hose that runs to the intake.  I would have used it but I could not get the rear inlet plug out of the intake manifold.  It was seized in there forever.  This is only for preheating the manifold for emissions purposes anyways.  It has no negative affect on the engine once it reaches operating temp anyways. 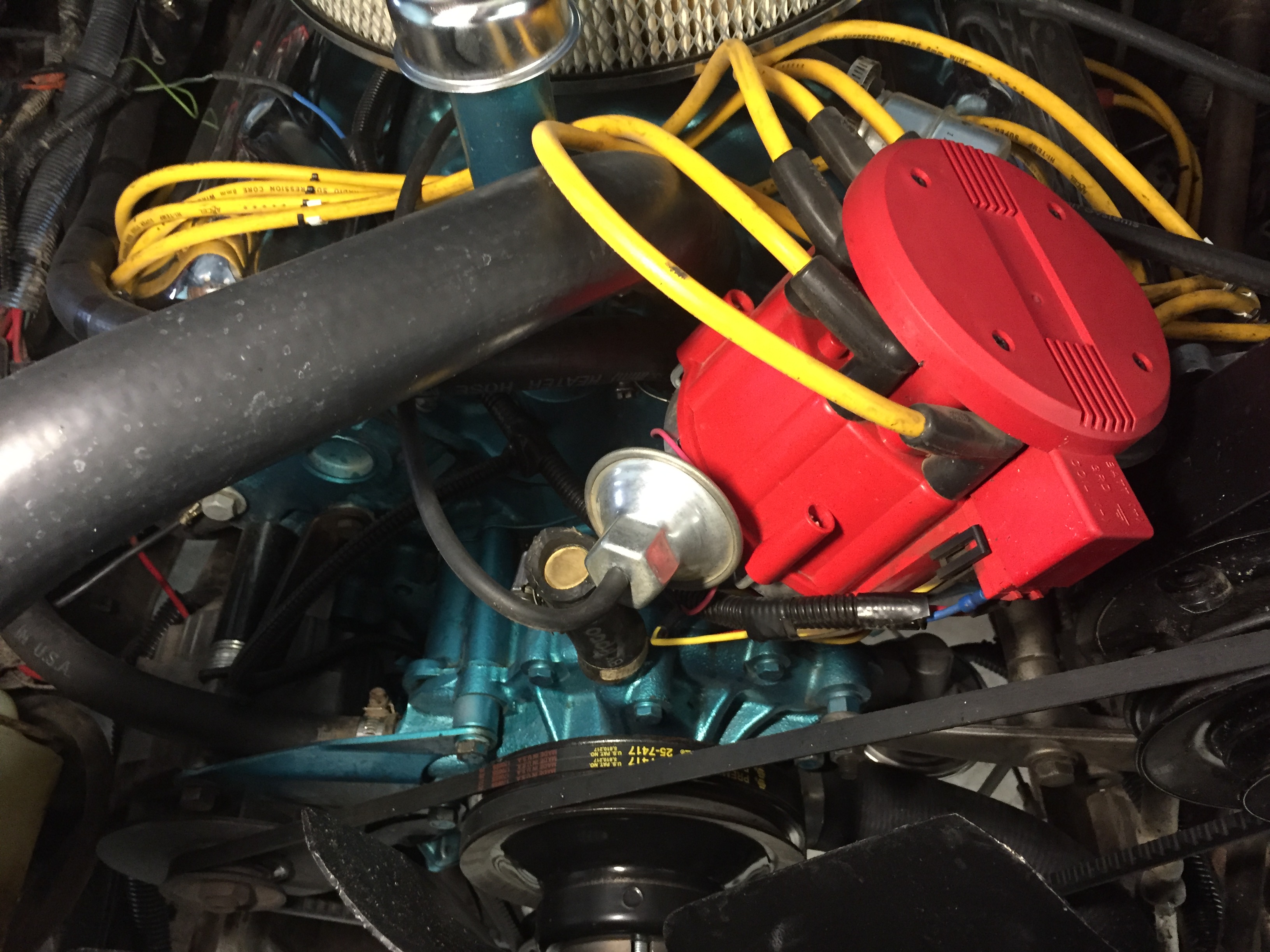 You must use the V8 motor mounts (shown below).  They will bolt in the exact same spot as the 6-Cylinder mounts.  The V8 will lower in easily and align right up no problem. 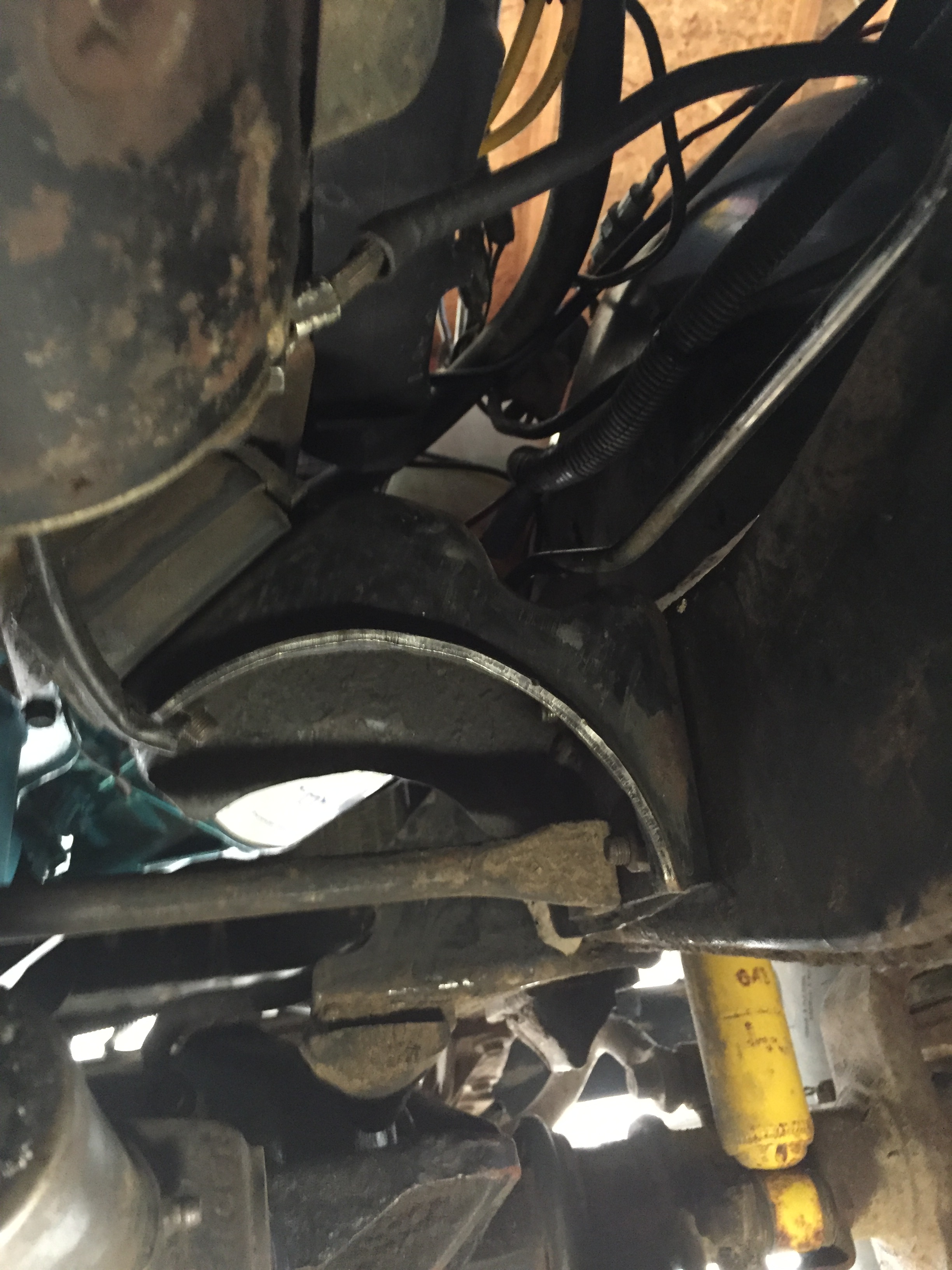 Throttle cable and bracket shown below.  I had to use the short cable.  Seems the auto parts dealer sells a long and short version.    Later I went to TSC and bought a stronger return spring for the carb.  I was having trouble with a “high” idle when sitting at a stop light.  It was from the weak spring so I replaced it with a new stronger one.  Problem solved. 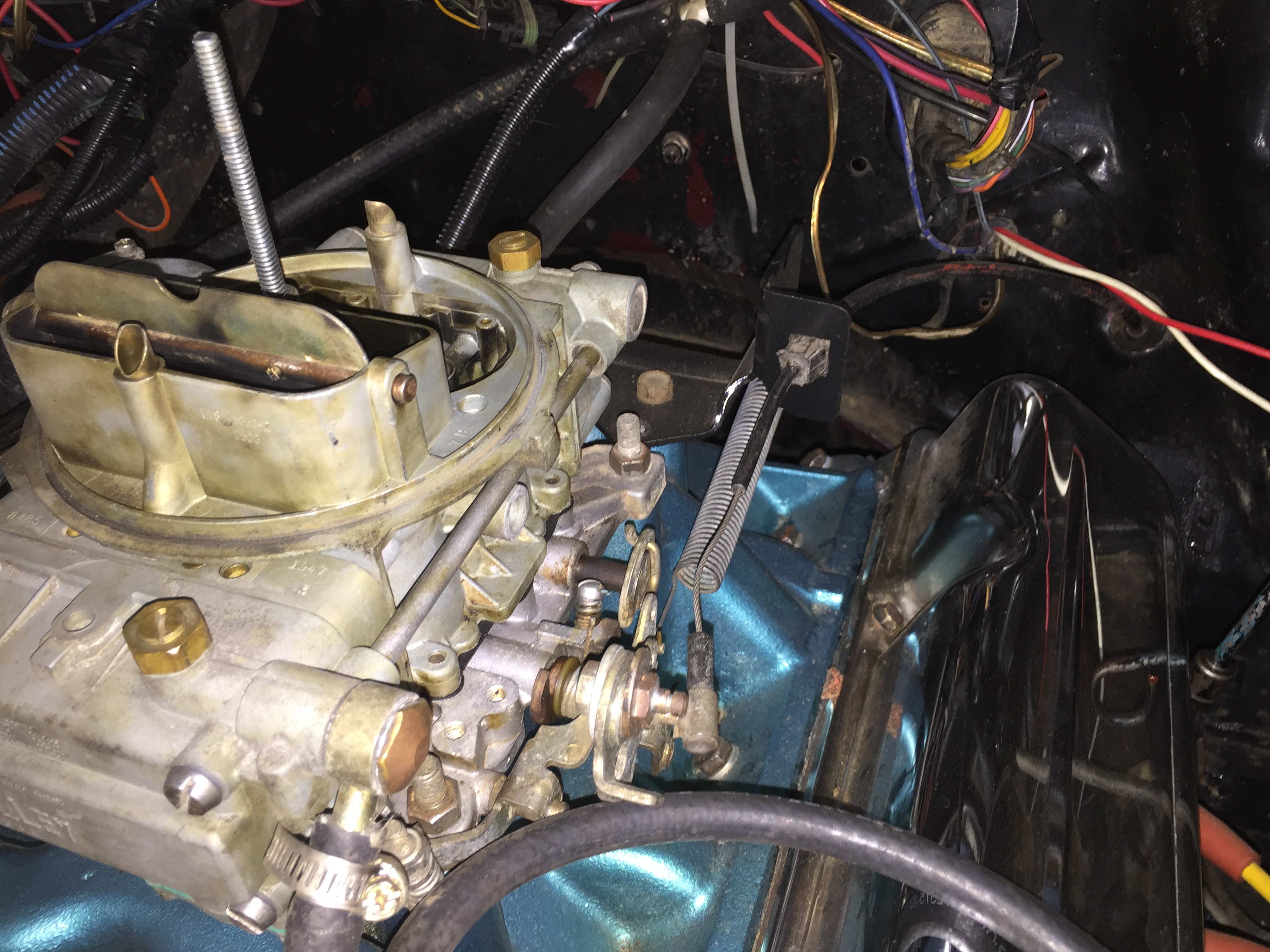 Drive Shafts:
Okay I had some trouble with the drive shafts not fitting.  The transmission shifted 1 inch forward which caused my drive shafts to bottom out (which is bad for them).
The rear drive shaft had to be lengthened.  I ended up cutting it in half and making a “sleeve” on my lathe that pressed into it.  1st thing to do is cut it in half shown below. 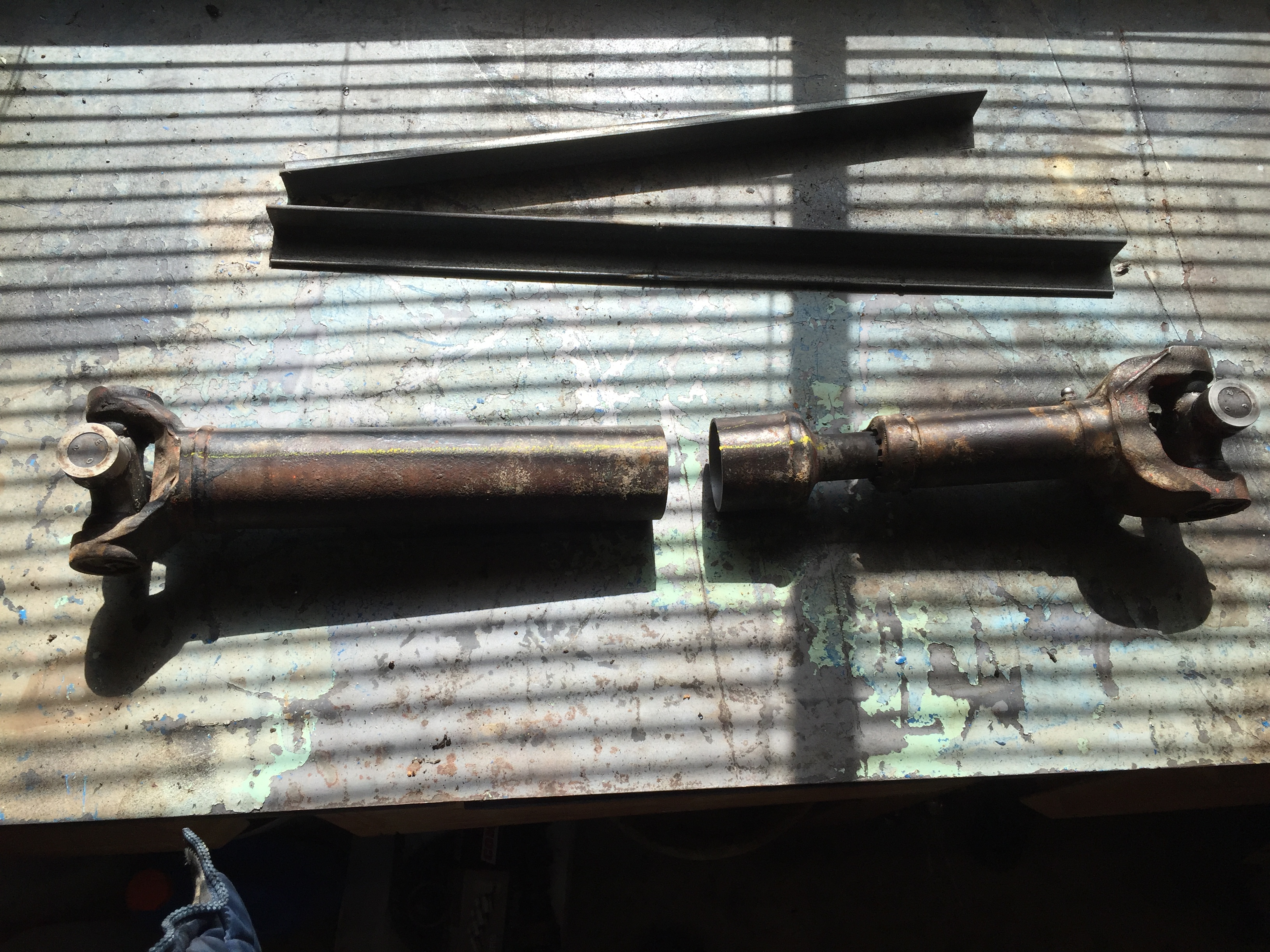 I made a “sleeve” that will press inside the drive shaft. 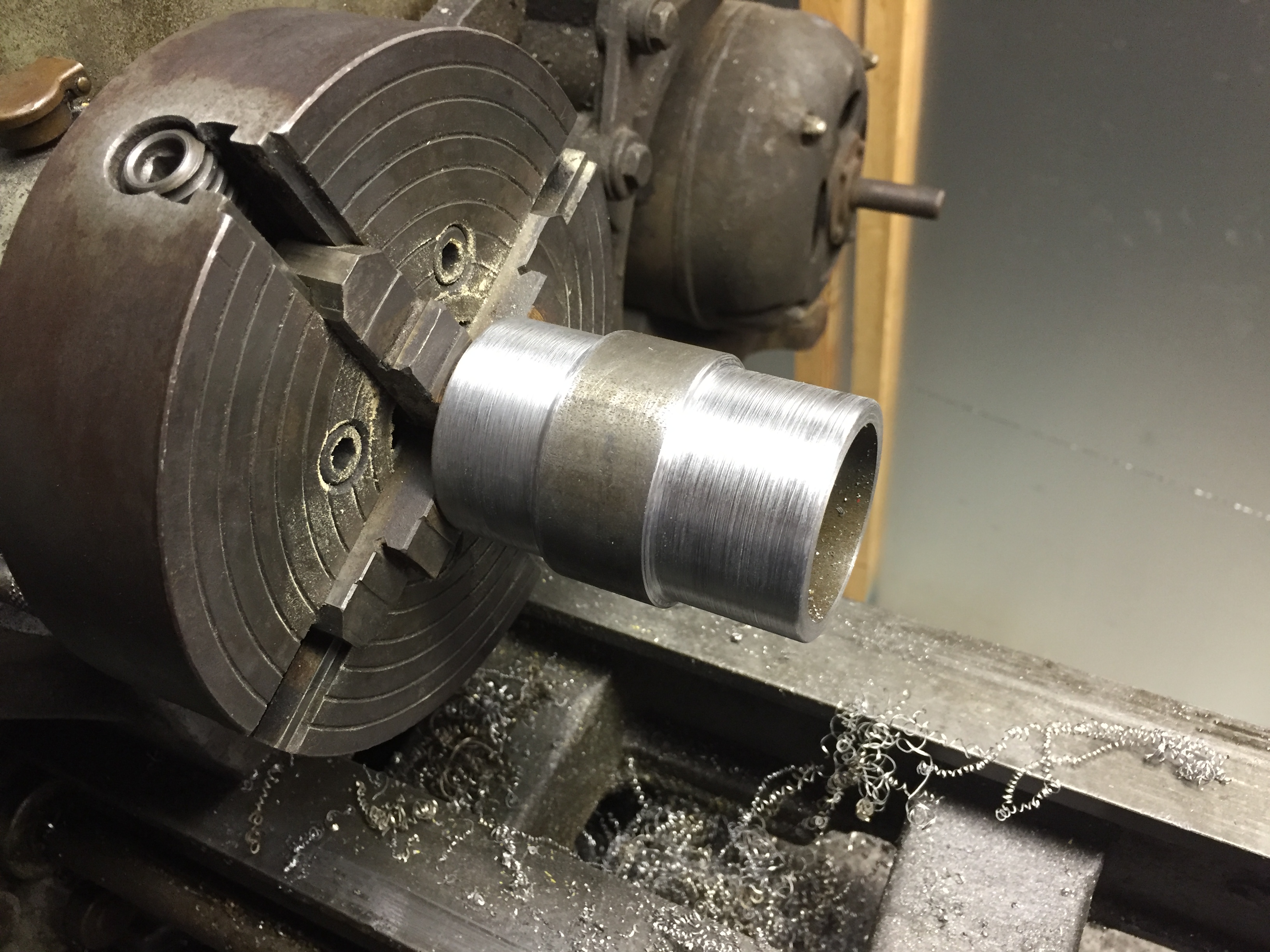 I pressed the sleeve into the shaft shown below.  Then I welded both seems all the way around the shaft.   The shaft has to be perfectly straight so I tack welded it first and measured the drive shaft run out with an indicator.  I got it within 0.003 inch which is good enough for me. 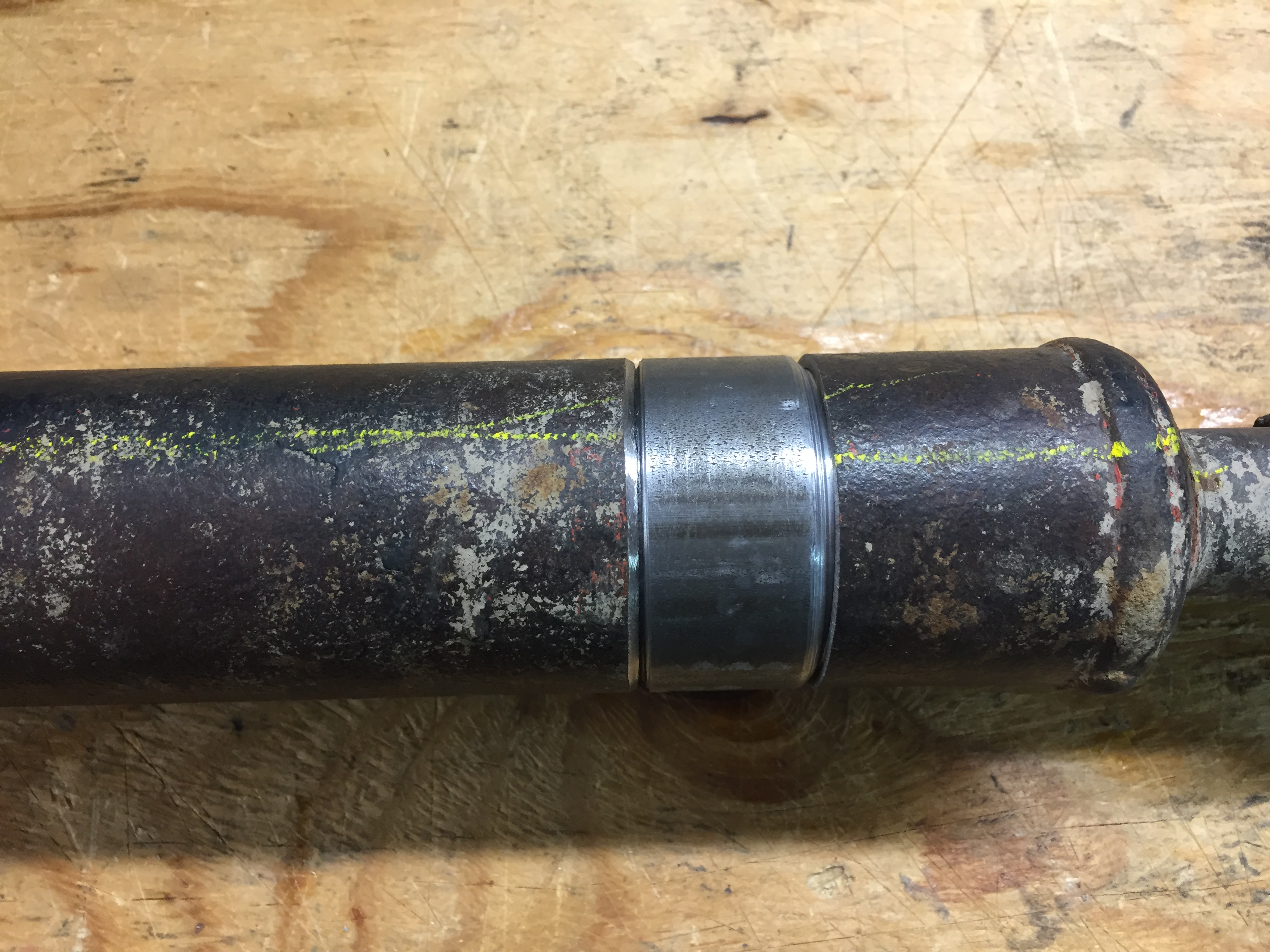 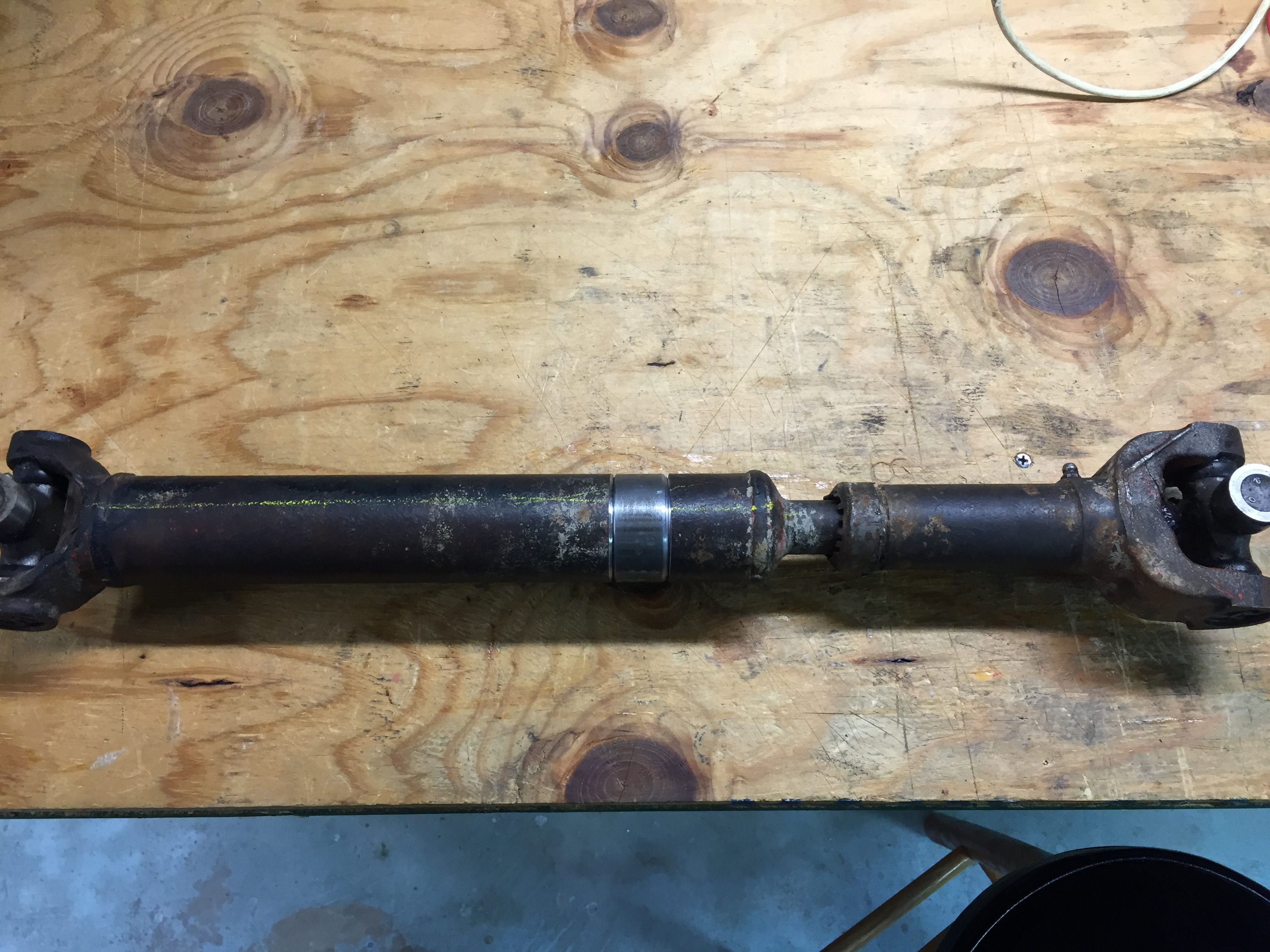 The front drive shaft was easy.  I just cut a 1 inch chunk out of it and welded it back together.  I clamped it to some heavy duty angle iron to keep it straight.  No problem. (see below). 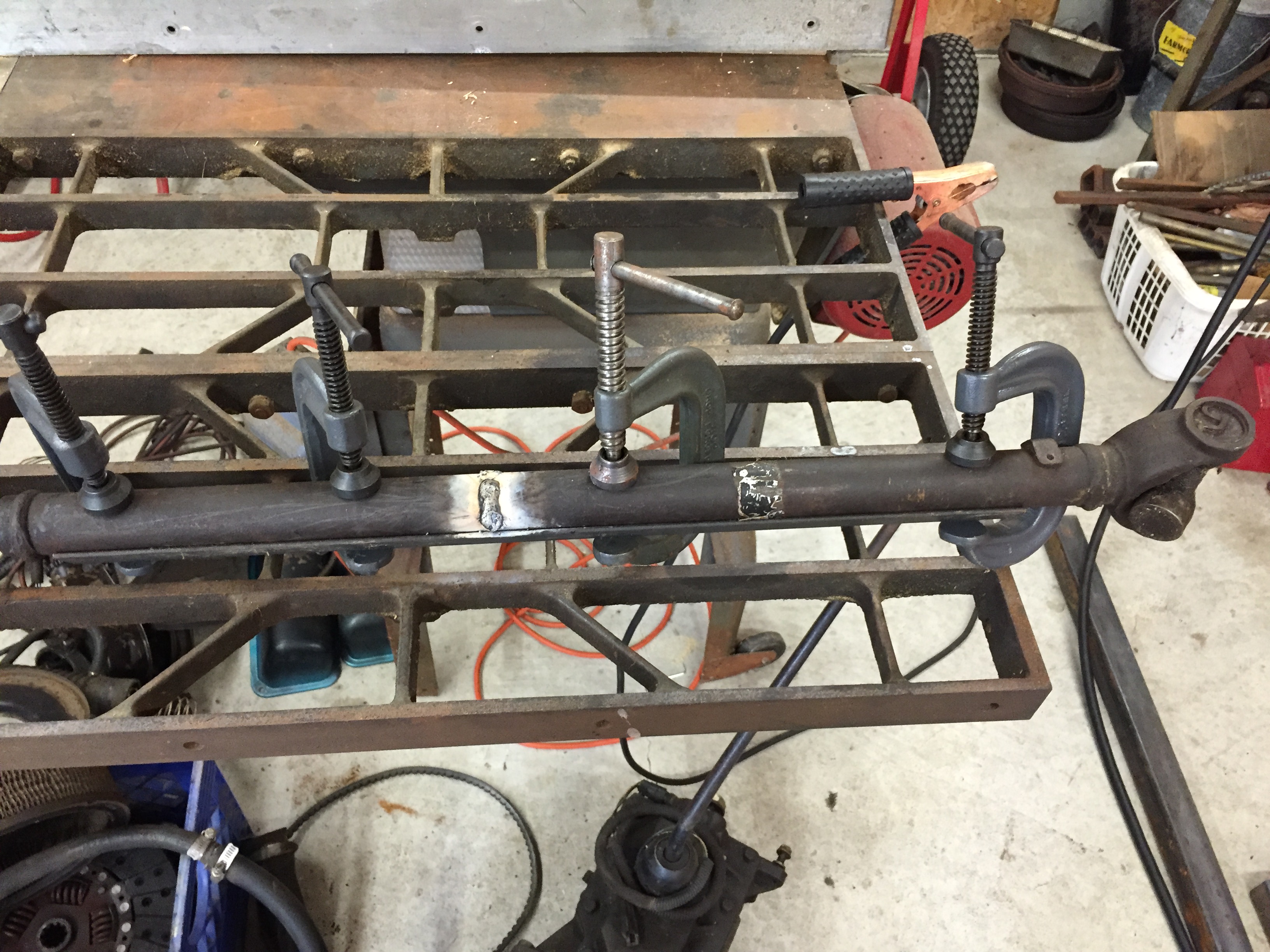 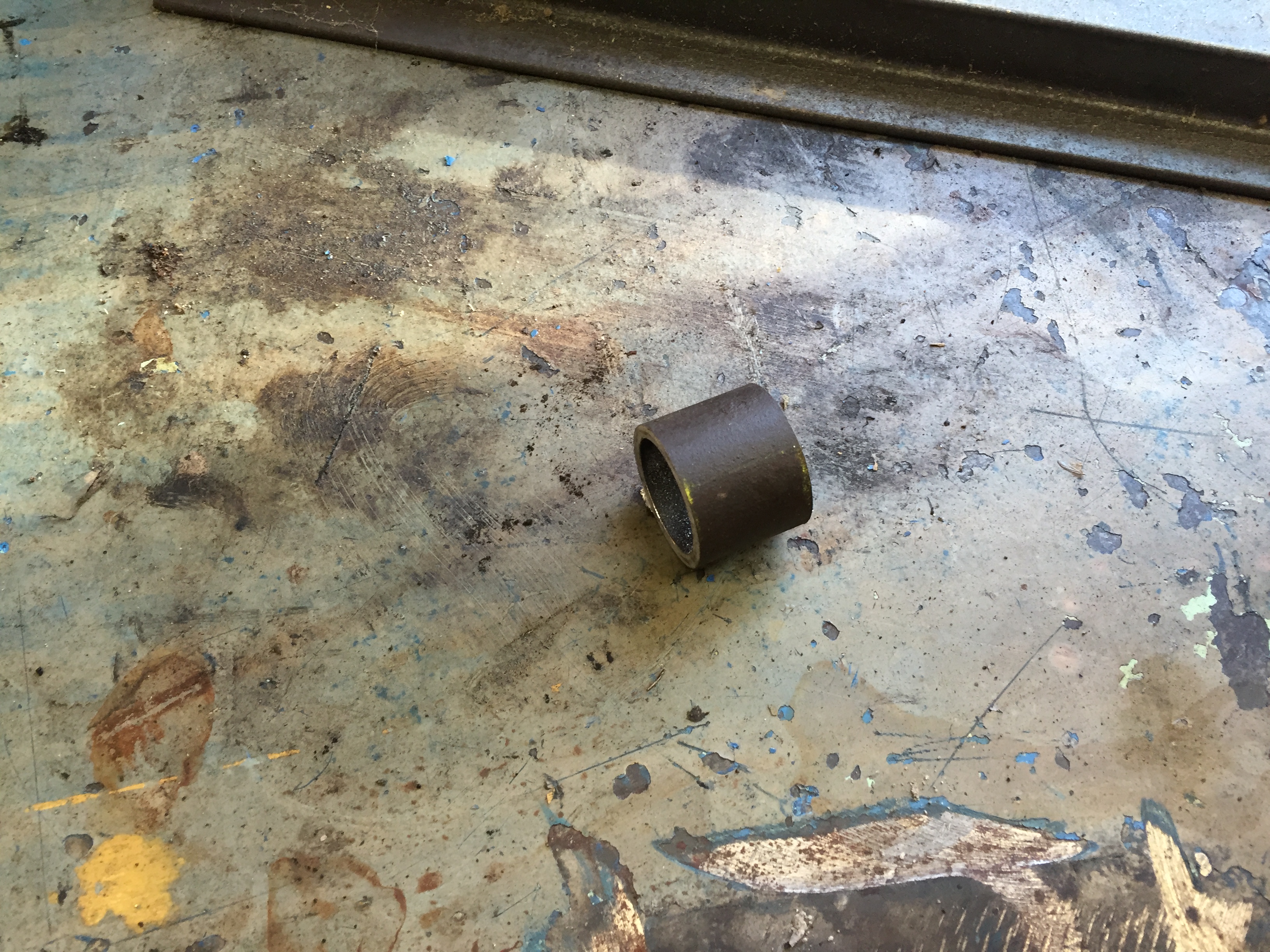 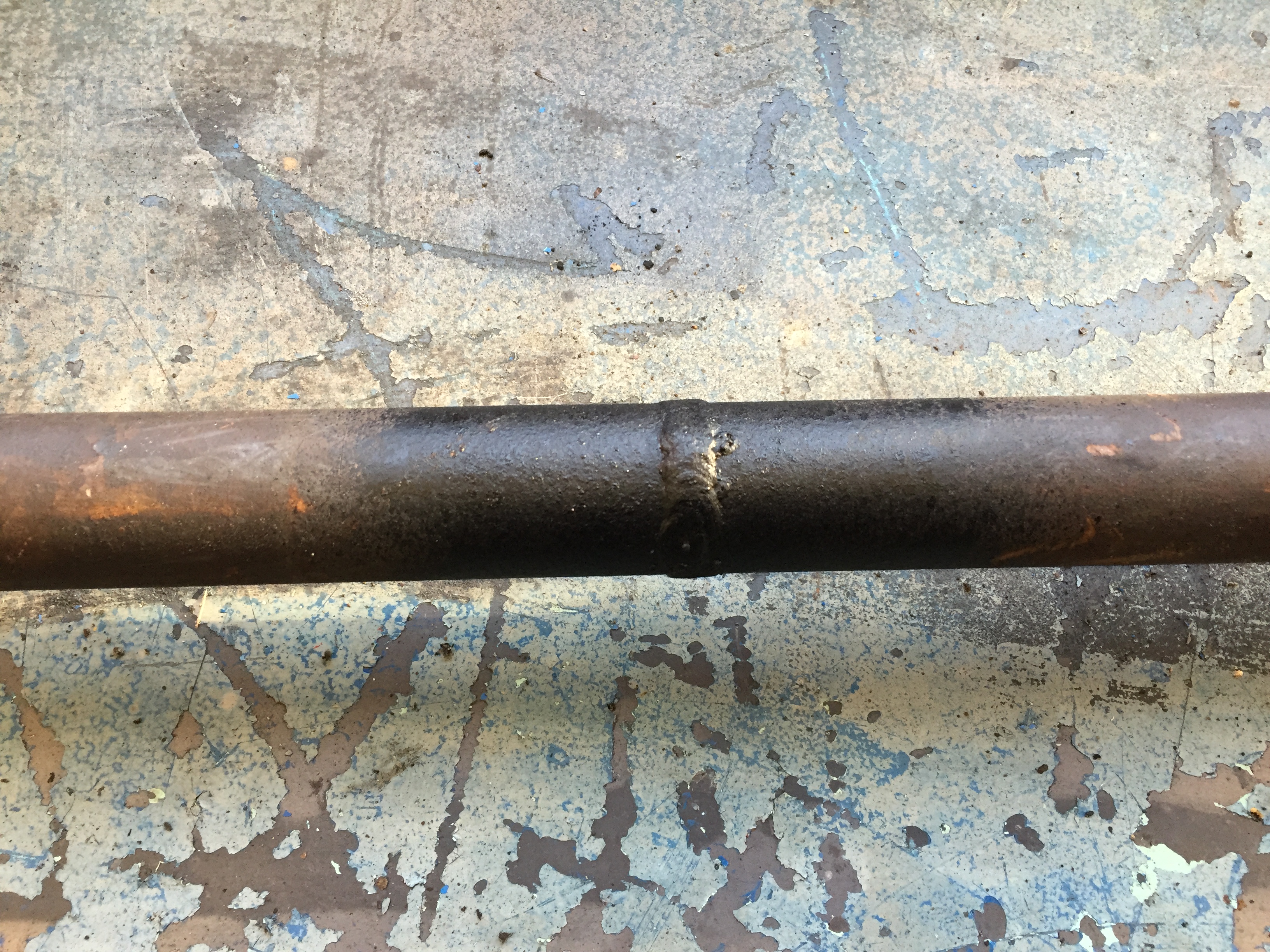 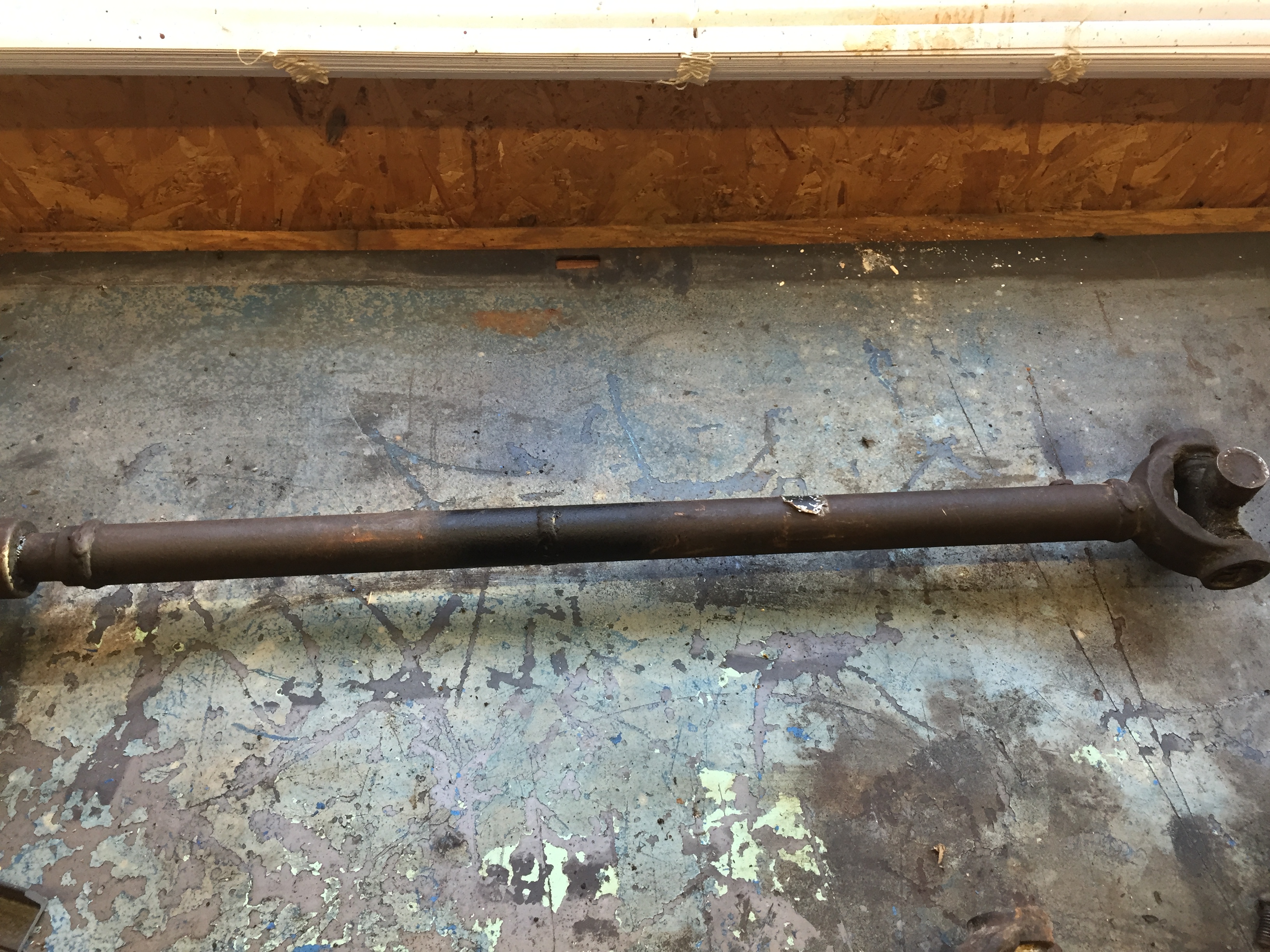 That’s about it.  The V8 install was the easy part.  The drive shaft part was a nuisance but not difficult.
Performance is great!   The power increase with the 304 is amazing.  I can squeal all 4 tires in 4wheel drive on the pavement and it will throw you back in your seat with a smile. .  lol.  The sound is classic V8.
Gas mileage is around 12MPG if I baby it.  If I put my foot into it I will get 8-9MPG.  The entire project took me around 2 months.   I worked on it almost every day after work for a few hours and longer hours on the weekends.   It was quite the experience and I learned a lot.    The next V8 swap I do might be something more complicated like a GM engine.
Videos of my Jeep running below:

Update 01-06-17
Summer is over… I got 3,000 miles on the new motor with no real issues.   I had a funny scraping noise from the underside which drove me nuts.  It ended up being the fly wheel rubbing on the transmission covers.  I adjusted them some and the noise went away.